The process of osseointegration is the real secret behind success of dental implants. Osseointegration is a natural process which is as important to success of the dental (and other implants) as the story of its discovery is interesting. Like many very useful scientific discoveries, the process of what we now call osseointegration also came to light by chance. It was in 1940, almost a century ago that Bothe and colleagues were experimenting with titanium as a prosthesis material for fractures in animal legs. They had chosen titanium for its strength and hardness. However, they noticed that the metal had a tendency to ‘fuse’ with the bone. Later, in 1951, Gottlieb Leventhal reported that the bonding of bone to titanium increased with passing time. In about four months the bonding was so strong that screws attached to the bones could not be removed without damaging the bone. The term “osseointegration” was later coined by Per-Ingvar Brånemark of Sweden who conducted further experiments with titanium objects in rabbit bones. In 1965, Gösta Larsson was the first human to receive a dental implant, again at the hands of Professor Brånemark. Since that time, osseointegration has been studied extensively. This property is also found in certain other materials, but as of 2016, titanium alloys are the preferred choice for dental implants and other surgical implants. The alloying is done to modify mechanical properties of titanium as desired. 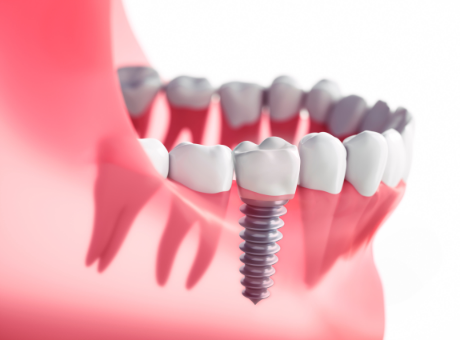 The process takes place automatically when a titanium object remains in contact with living bone. Bone cells grow onto the surface of the metal, and the bond is mature in three to six months. It is for this reason that in the routine implant placement procedures, dentists like to give a gap of about three to six months after installation of implants before a prosthesis is built over them. In the case when implants are loaded in a single day, the dentists advise patients not to load their implants with hard food initially. I shall discuss more about conventional and same day implant loading in more detail in the preceding chapters. Before that, let’s discuss who can benefit from dental implants?