Acid erosion, also known as dental erosion, is a type of tooth wear. It is defined as the irreversible loss of tooth structure due to chemical dissolution by acids not of bacterial origin. 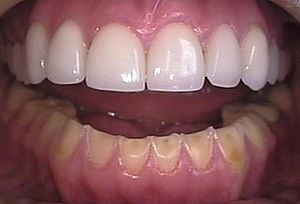 Dental erosion is the most common chronic disease of children ages 5–17, although it is only relatively recently that it has been recognised as a dental health problem. There is generally widespread ignorance of the damaging effects of acid erosion; this is particularly the case with erosion due to fruit juices, because they tend to be seen as healthy. Erosion is found initially in the enamel and, if unchecked, may proceed to the underlying dentin.

The most common cause of erosion is by acidic foods and drinks. In general, foods and drinks with a pH below 5.0–5.7 have been known to trigger dental erosion effects. Numerous clinical and laboratory reports link erosion to excessive consumption of drinks. Those thought to pose a risk are soft drinks and fruit drinks, fruit juices such as orange juice (which contain citric acid) and carbonated drinks such as colas (in which the carbonic acid is not the cause of erosion, but citric and phosphoric acid). Additionally, wine has been shown to erode teeth, with the pH of wine as low as 3.0–3.8. Other possible sources of erosive acids are from exposure to chlorinated swimming pool water, and regurgitation of gastric acids.