Pros and Cons of the Dental X-Ray 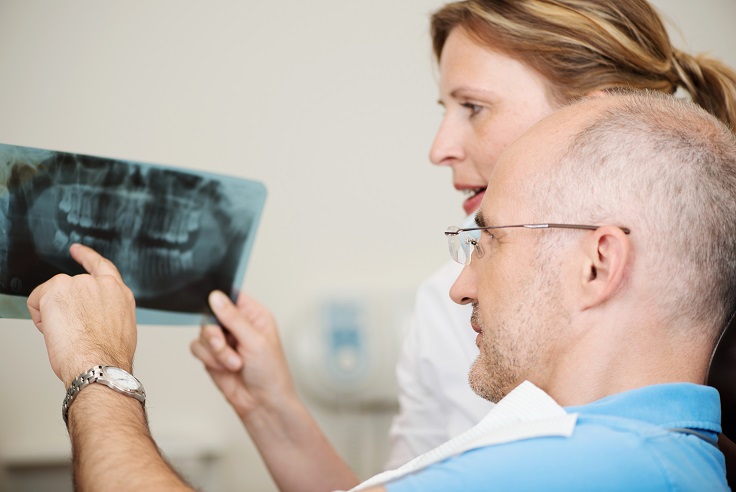 X-rays, also known as radiographs, are an essential part of any dental care treatment plan. They are diagnostic, but they can also be preventive, by helping a dentist detect potential oral care issues in a patient’s mouth before they become a major problem. The pros and cons of the dental x-ray are often the topic of heated debate. One factor, however, cannot be disputed.  There is simply not a better way to discover if a cavity or periodontal disease-or both- are present.

The problem is the amount of radiation emanating from the dental x-ray and the prospects for causing cancer that distresses many people. Ionizing radiation is a form of radiation that has enough energy to potentially cause damage to DNA. Risks from exposure to ionizing radiation include a small increase in the possibility that a person exposed to x-rays will develop cancer later in life. Most dental experts agree that dental x-rays promote only a small increased risk of cancer in future from exposure to ionising radiation. Still, there is no denying that the radiation dosage from a dental x-ray is greater than that of the plain x-ray. What worries some patients about the radiation effects of the dental x-ray is that the after effects of x-ray exams may not be truly discovered until later in life.

First, it should be established that the dental x-ray is crucial to diagnosing dental problems and the radiation effect from a dental x-ray should not keep someone from seeking dental care. It is clear that the benefits of a dental x-ray far outweigh the risks. As for the worry about radiation, be advised that dental x-rays are one of the lowest radiation doses performed. Getting a bit technical for a moment- a routine exam which includes 4 bitewings is about 0.005 mSv, which is less than one day of natural background radiation. It is also about the same amount of radiation exposure from a short airplane flight of 1-2 hrs. The fact remains that many diseases of the teeth and surrounding tissues cannot be seen when your dentist examines your mouth without X-rays. Just a few things a dental x-ray may reveal:

But patients should be comforted by the knowledge that technology has improved and the dental x-rays today expose us to much less radiation than before. Additionally, taking the simple precaution of using a protective apron can lower the risk of exposure to radiation. This step will limit the exposure to radiation that causes so much patient anxiety. These days, most aprons have an extra piece that wraps around the neck to protect the thyroid gland. So ask your dentist about an apron with the enhanced protection. For added relief for the patient is a declaration from the National Academy’s National Research Council which found that low doses of radiation pose some risk for cancer, but the risk is minimal. The Council opined, “It is unlikely that there is a threshold below which cancers are not induced, but at low doses, the number of radiation-induced cancers will be small.” Translation: don’t let the prospect of a dental x-ray deter you from proper dental care.